With Bible, hymn book and catechism packed among their belongings as they left the countries of northern Europe in hope of a better life, Lutherans formed an important tributary to the stream of immigrants which poured into the new world of North America. Upon arrival, the settlers would find themselves in the midst of virgin forest. They felled the trees and cleared land for cultivation.

The German Lutheran settlers from West Prussia and Mecklenberg, Germany were responsible for conducting the first Lutheran worship in Sullivan. They would eventually organize St. Peter’s congregation. They came to what is now known as the Township of Chatsworth area of Ontario in 1858 and 1859 from the district now known as Cambridge, Ontario. Most of the settlers had belonged to a Lutheran congregation, either in Canada or Germany, and when they settled in Sullivan they missed that fellowship.

At first, some of the families would gather together in a neighbour’s home for worship. Others tried to satisfy their religious cravings in a church of another denomination; however, refusing to be led contrary to earlier religious instruction, Johann Mannerow, one of the leaders of these settlers, sent, with hearty approval of the other families, a letter to the Reverend Immanuel Wurster, his former pastor in Preston (now Cambridge) asking him to supply them with the services of a Lutheran pastor.

In 1861, Pastor Christian Behrens was appointed and in the spring of 1862, Pastor Behrens came to Sullivan on horseback from Normanby Township to conduct the first worship service in the home of Ernst Luben. Over the next three years, the congregation’s attendance grew and they soon realized the need for a church building.

It is our understanding one of the houses used for worship was eventually torn down and some of the logs re-used to build a church. The log church stood six-tenths of a kilometre east of the present stone structure, which was built in 1881 and dedicated to God’s glory on January 12, 1882. 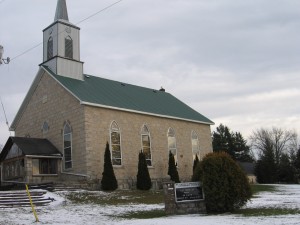